George St Chapel Experience Tours tell the story of the chapel and the people who built and worshipped there.

Our unique story cannot be complete without visiting life below the chapel...... by meeting the cellar dwellers and the school mistress , and by chatting to the washer women on Jackson Pit our story of George Street Chapel really comes to life.

We are looking for NEW VOLUNTEERS to join our Chapel Interactors and help us tell the story to visiting tour groups. No experience necessary and full training will be given but a sense of fun is paramount!!

Posted by Halenffrind at 14:31 No comments:

Email ThisBlogThis!Share to TwitterShare to FacebookShare to Pinterest
Labels: FOGS

This illuminated manuscript was drawn by Thomas George Fleet in 1916 to celebrate George Street Chapel's centenary year. He died the same year in France fighting in WW1. The manuscript was donated to the chapel and school by his father, John H Fleet.

Posted by Halenffrind at 22:04 No comments:

Email ThisBlogThis!Share to TwitterShare to FacebookShare to Pinterest
Labels: remembrance

On 23rd Feb Lisa Thompson filmed at George Street Chapel for inclusion in a film she was making for the Architectural Heritage Fund to describe the grants administered by them, in particular the specific grants sponsored by the Andrew Lloyd Webber Challenge Fund and English Heritage.
We posted a record of the filming day on our blog on 10th Oct - Filming a Filming - but click on the link here to see the finished video for the AHF.

Posted by Halenffrind at 18:42 No comments:

Two new notice boards have been erected on the George Street elevation.
They replicate the original boards that used to hang on the wall.

Posted by Halenffrind at 19:36 No comments:

Manchester Eye Hospital is celebrating its 200th year looking after the sight of the people of Manchester. Their web site gives information about the history and development of the Eye Hospital which was started in 1814.

So, what connection is there between the Eye Hospital and George Street Chapel? Apart from the fact that they are almost built at the same time.

Well, one of the members of the chapel, Alice Dronsfield, was treated at the hospital in her old age, before 1886 when she died.


An obituary for Alice Dronsfield (1814-1886), published in the Independent Methodist Magazine and states that she had an operation at Manchester Eye Hospital and that she requested that the operation was carried out without anaesthetic.

About this time her eyes, always weak were attacked by disease, and she went to the Manchester Eye Hospital. With the injunction that chloroform should not be used she consented to an operation. “I committed myself,” she afterwards said, “in prayer to the care of God, asking Him to give me strength, and the doctor skill,” and she felt assurance that all would be well.

To celebrate the bicentenary of the Manchester Royal Eye Hospital, Mr Nicholas Jones, Consultant Ophthalmologist, has written its history. The book is entitled "Manchester Royal Eye Hospital 1814-2014: An Inside View". It is hardback, 294 pages and richly illustrated in colour and B&W. Details on the hospitals web site.
Mr Jones has said that she may have been given a local anaesthetic of cocaine to help with pain, but that chloroform at that time was usually given only to young fit people.

Posted by Halenffrind at 12:14 No comments:

The pipe organ was rebuilt in January 2014, but there was a lot more work to complete within the building after that. On 19th August we held a small choir practice with the Age UK Oldham Choir when the organ was played by Les Garner. The sound recording will be used in the introductory video to be shown to visitors, and it is used as the background music to video recorded of the pipe organ being rebuilt last January. 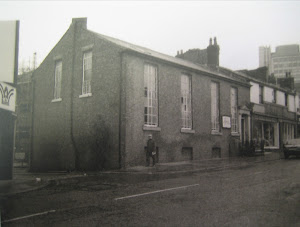